Trixie Whitley - Breathe You In My Dreams (Filmed Live in Concert) 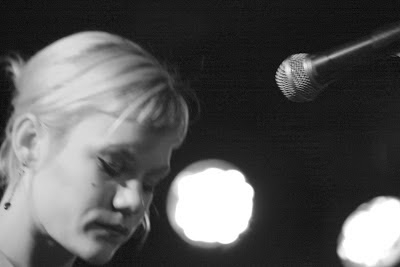 A girl walking with emotionally sensitive depth in the now, Trixie Whitley does it her way. Her music is grounded in authenticity so rare in this age of manufactured talent shows and misguided stardom. Whitley's pure soul is so deep it transcends and forgets genres, in her minimalist state with just her and her guitar or piano, or with a full band and/or studio recording.

Favorite recordings of Ms. Whitley's may indeed be her raw unpolished live takes with one mic and her instrument of choice. They kill you every time with her uncontrived way of laying it down that takes listeners all the way there to feel it.

When I first heard this stripped down live version of Whitley's song titled Breathe You In My Dreams, I fell in love with it immediately, not knowing it's a live recording until hearing the applause at the end, made it even more appetizing, because one realizes this is as raw as it gets. I eventually found the video of the performance, below, and it's a most beautiful performance. Although the recording is raw and unpolished since it was recorded on a camera based microphone, she transcends the sonic limitations.

Breathe You In My Dreams (Live at Rockwood Music Hall)

The LA based soulful rock band known as Vintage Trouble produced this video with a full choir and their holiday message.


Connect direct with Pink at PinksPage.Com