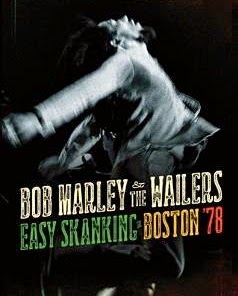 In 1978, legendary Boston concert booker, Fred Taylor (read the Music Museum of New England biographies on his life here and here) and his company H-T Productions, were doing one-off shows at the Music Hall in Boston.  They booked Bob Marley & The Wailers during the period that the group was promoting it's Kaya album and tour. This show in Boston was dubbed Easy Skanking in Boston '78.  Filmed by a solo hombre with the audio beautifully captured, it was recently released from the Marley family vault and made available in February 2015 for the first time.

Just below is the recently released video of I Shot The Sheriff from this show. What I really love about it is that it was shot by a solo hombre, meaning there was only one camera operator and he used film! It's cool hand-held footage, from one perspective in the front row of the event, and as enjoyable as many professionally filmed concerts that switch back and forth to additional cameras. A animation house, known as S77, filled in some blanks on this production, with some nice transitions, perhaps to cover gaps during the periods when the camera man was switching out rolls of film in his camera. Turn it up & enjoy!

And we found one more clip from this wonderful release that is a song that captures the essence of Bob's fight for the underdogs of the world in a quest for liberty and freedom, that is not reserved only for the privileged. When Bob Marley proclaims: "Yeah, Rastafari. Until the philosophy which hold one race as superior and another inferior, is finally and permanently discredited and abandoned", one should know what song is coming. WAR

Connect direct with the record label Bob Marley founded, known as Tuff Gong, with daughter Cedella Marley as current CEO, at TuffGong.Com and Facebook.com/tuffgonginternational  and Twitter.com/tuffgongstudio

Just below is a photo of the original handbill, now considered collector's item. Wolfgang's Vault has one for sale. Click here to view the item. 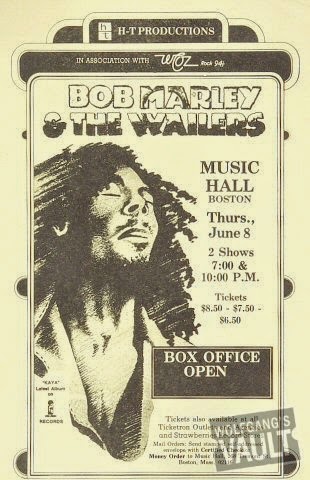